In 1889, as the first actual jetty construction was begun by the Brazos River Channel And Dock Company, an attempt was made to finance the project with bonds on the English market, so the British harbor expert Sir John Coode was asked to evaluate the plans.  After his son came to Brazoria County to collect data and measurements, they prepared a report including four map drawings (below).   Three appear to have been directly created by Sir John Coode. There is a fourth drawing showing the lands of the Texas Land And Immigration Company in Brazoria County, not apparently made by Coode but perhaps given to him so these lands could be drawn into his other drawings.  All originals are at the Dolph Briscoe Center for American History, mounted on a canvas backing, and stored in a rolled condition, Call Number G 4032 B73 1890 C (No. 1, 2, 3 and 4).  High-resolution photos of the Briscoe originals were made in Jan-2020 at our request (di_11904 through di_11907).

Sir John Coode Drawing No. 1 (227 x 106 cm) - “General Plan” showing the Brazos River and Oyster Creek north to about Chenango,
railroads to north of Arcola, and the new jetties under construction
Coode Drawing #2 is a key document since it is the only known historical map that actually labels individual houses at Velasco and Quintana (critically, the “Shannon” and “Herndon” houses).  Comparison to earlier maps then allows some certainty in assigning ownership to unlabeled structures on those maps.  The “Herndon" house of this time seems to be an outbuilding or new structure built after the 1875 hurricane, in the west end of the property where the famous "Archer-Herndon House" existed from 1838-1875.  Drawing No. 2 is also important as it shows the jetties in the stages of construction, including Coode's recommendation to lengthen and cap them.  These maps apparently were accompanied by a written report on the jetty project, although our efforts to locate a copy of the report in 2019 have been unsuccessful.

In 1898, Adele B. Looscan (1848-1935) published a seminal article entitled “The Old Mexican Fort at Velasco”, apparently after interviewing several life-long residents of the area.  In this article, the second wife of James T. Shannon (Mrs. Ellen Adele Wilcox Shannon) claimed her residence (in Lots 8 and 9 of Velasco Block 13, fronting on the southeast side of Fort Street) as the site of the 1832 Mexican fort.  Mr. Alexander Glass Follett, Sr. (1822-1906) agreed, and also added that Mrs. Shannon’s house was newly-built in 1887, after the previous structure was damaged in the 1886 hurricane.  So, even though it is from 1890, this map may be our best clue to the original location of the 1832 fort.

Sir John Coode Drawing No. 2 (370.5 x 111.2 cm) - “Plan of Brazos River” showing the last few miles of the Brazos River
including many fine details and a proposed town of Brazos (soon to be the location of new Velasco) 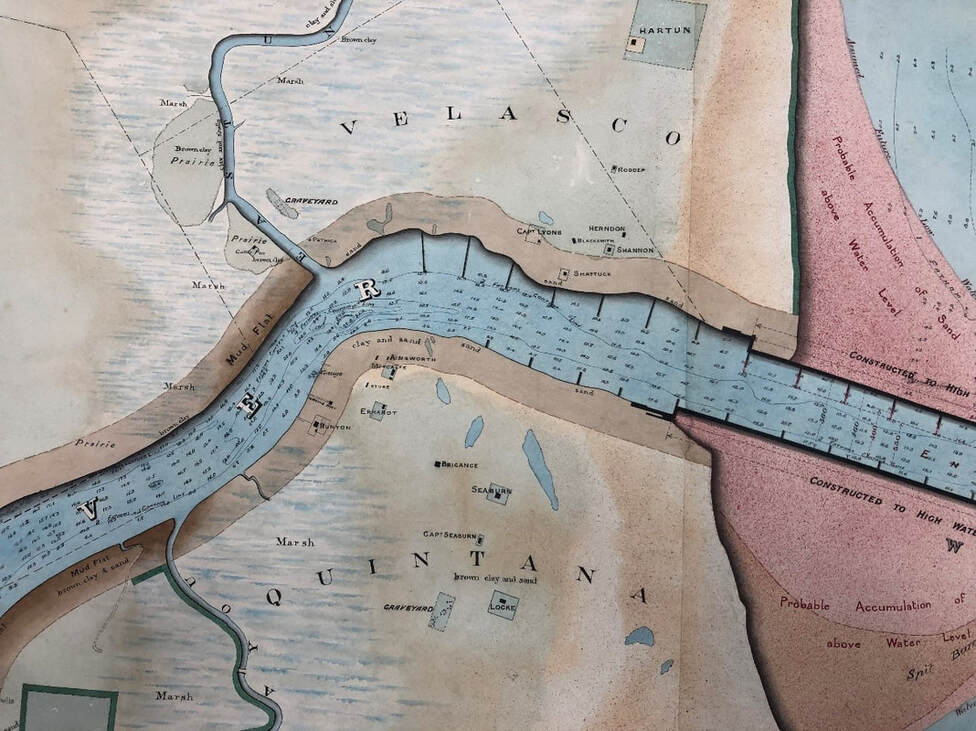 Close-up detail of Velasco/Quintana portion of Coode Drawing No. 2
(a similar image was used as cover art for "Archival and Archeological Investigations at Quintana Townsite and Fort Terrell"
In 1891, George Y. Wisner, wrote an article about the Brazos jetty project, including an excellent summary of prior attempts to install jetties, for the "Transactions of the American Society of Civil Engineers" which quoted an excerpt from the report by Sir John Coode as
​"I consider the system on which the Brazos jetties have been laid down by the engineers of the company to be perfectly sound.  The points on which I differ from these gentlemen are: First, the probable extent to which it will be necessary to project the jetties into the gulf; and second, the amount of contraction requisite to maintain the standard depth throughout the year.  The navigable depth, which is in my opinion the maximum likely to be maintained throughout the year by means of the work as proposed, has already been stated as 20 feet at mean low water, and a width of channel at that depth of 100 feet." 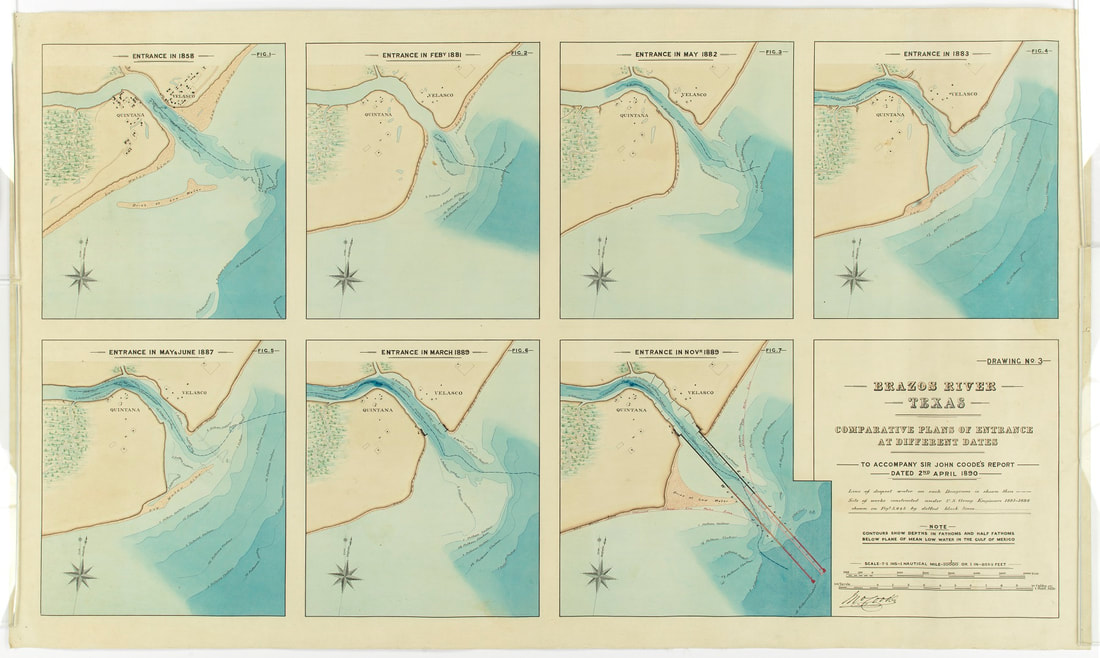 Sir John Coode Drawing No. 3 (121.3 x 68.5 cm) - "Comparative Plans Of Entrance At Different Dates"
showing seven figures of the Brazos mouth as it had changed over time 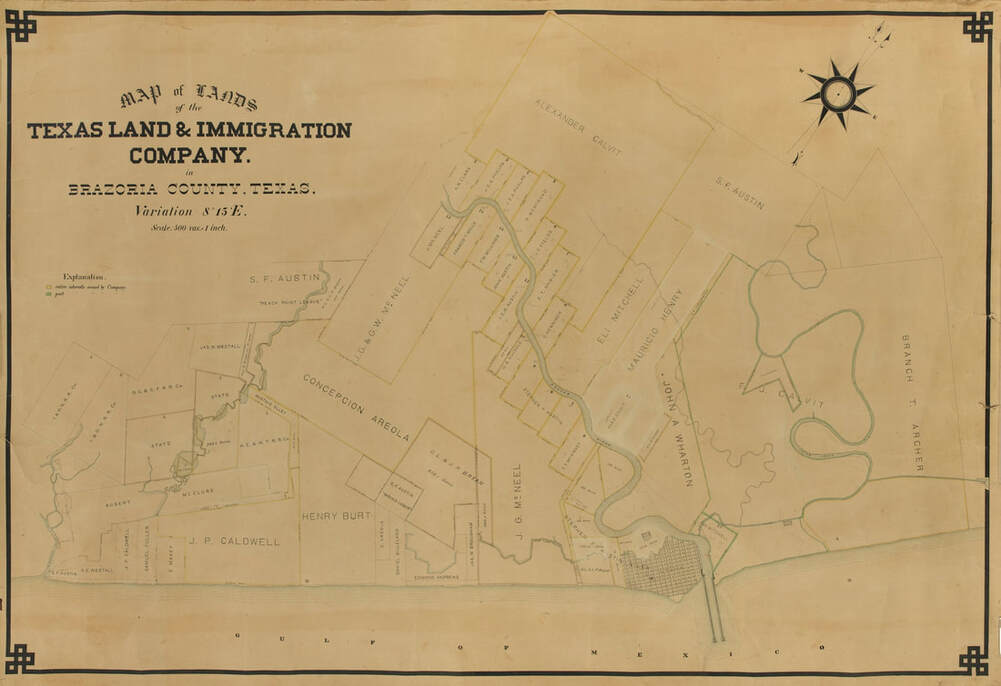 Sir John Coode Drawing No. 4 - "Map of Lands of the Texas Land & Immigration Company"
​
​A narrative report that discusses all of the research on
the several Forts Velasco is available at the link below:

Background wallpaper is from 1836 version of "Map of Texas - With Parts of the Adjoining States" by Stephen F. Austin, printed by H. S. Tanner of Philadelphia