A set of three hand-drawn charts is found in the National Archives, prepared (circa 1862) by Capt. Tipton Walker, Chief of Topographical Bureau of Texas, New Mexico and Arizona for the Confederate States Army in the early Civil War period.  They are described there as "A large-scale map of the coast from Matagorda Bay to Galveston Island showing the location of signal stations and forts, signed by Capt. Tipton Walker", cataloged at a location listed as "1.130 Local Coastal Defenses, Record Group 77:  Z 343".  Black and white photostat copies of these charts were obtained many years ago, each sheet measuring about 17”x 42”.  In 2019, these copies were digitized, and are shown below.  On sheet 1 of 3 (3rd chart below), a name for this series of charts was apparently written on the back side in ink, that bled through the paper and is visible in the upper left corner as "Coast of Texas from Galveston Bay to Matagorda Bay".  These charts are useful since they show many geographical features of the time.

The chart from the northeast end of (East) Matagorda Bay to Cedar Lake (sheet 3 of 3), including Caney Creek and Cedar Lake Bayou, is shown below:

​
The section from Cedar Lake to the mouth of Oyster Creek (sheet 2 of 3) is shown below, indicating Jones Creek, the mouths of the San Bernard and Brazos Rivers, as well as the towns of Quintana and Velasco:

Interesting features of these charts show the early version of canals (built in the late 1850's) joining the Brazos River to Oyster Creek to Drum Bay (and then Galveston Bay) for transport of goods to Galveston avoiding the Brazos bar and the Gulf, local roads to Quintana and Velasco, and that Oyster Creek emptied directly into the Gulf.  In the years following, though, the presence of these canals allowed diversion of the occasional floodwaters of Oyster Creek, preventing freshets from scouring the channel, ultimately resulting in the mouth silting up, such that it no longer met the Gulf.  Details of the Brazos River Canal Company and others can be found in Transportation Enterprises for the Brazos River Valley, 1836-1861.  Portions of the Tipton Walker sheets 1 and 2 have been electronically spliced to show the Oyster Creek area, shown below: 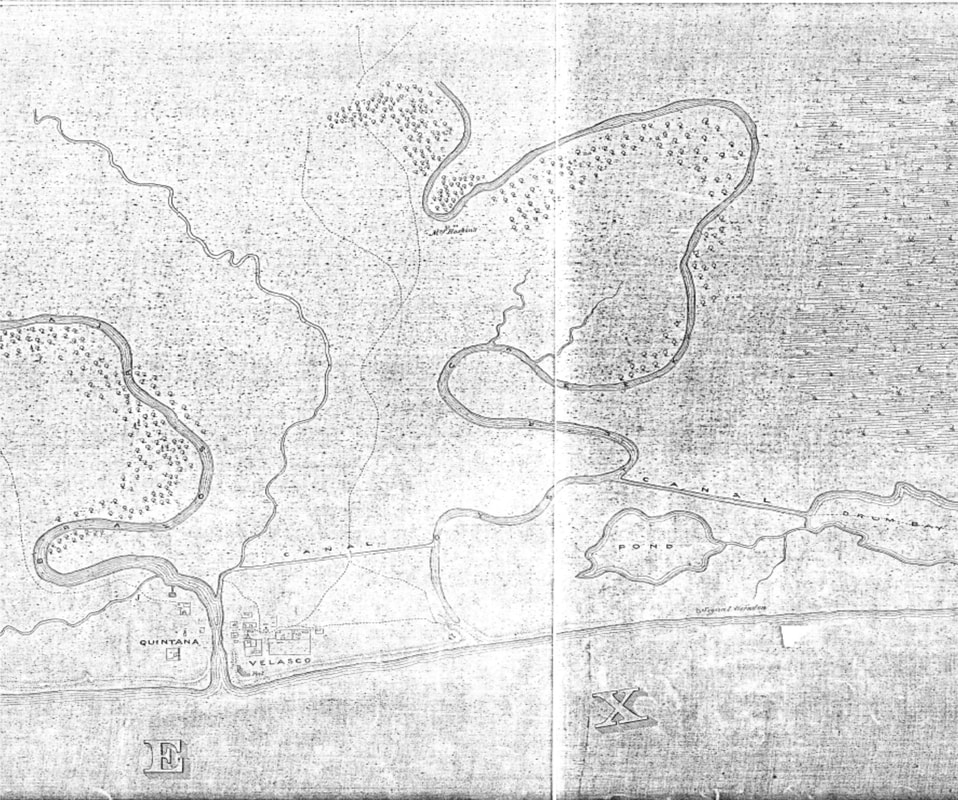 ​Another map of the entire Texas coast was prepared by Capt. Tipton Walker in 1864 (below) showing many of the forts defending the coast, but without many of the fine details of the 1862 charts.  One badly stained black-and-white version can be found at the National Archives, listed there as "A manuscript map of the gulf coast of Texas", and cataloged as "1.130 Local Coastal Defenses, Record Group 77:  Z 298".  Another more-legible copy is found at the Gilmer Civil War Maps Collection at the University of North Carolina at Chapel Hill, logged there as "Coast of Texas and its defences", and this version is shown here:

In the open area of this document above the Brazos River mouth is drawn a detail for the forts there.  A cropped and expanded version of this area is shown below: 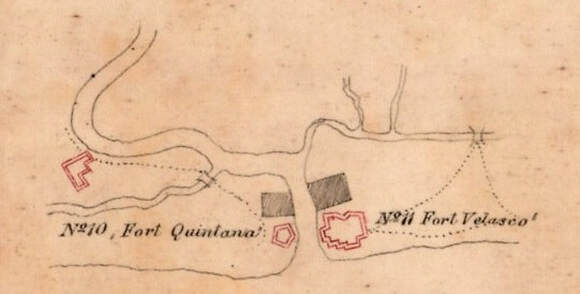 ​A published colorized version of the map is shown below, found as part of Plate LXV in Atlas To Accompany The Official Records Of The Union and Confederate Armies, published by the Government Printing Office, 1891-1895.  This version instead includes an inset in the upper right corner, showing minor details for the individual forts (which are numbered on the main chart); the Brazos forts are shown together in the extreme upper right corner.

Map of "Coast of Texas and its Defenses" by Tipton Walker, 1864
​A narrative report that discusses all of the research on
the several Forts Velasco is available at the link below:

Background wallpaper is from 1836 version of "Map of Texas - With Parts of the Adjoining States" by Stephen F. Austin, printed by H. S. Tanner of Philadelphia