CHRONOLOGICAL AND ARCHAEOLOGICAL HISTORY OF THE FORTS VELASCO
This cantonment of the Mexican Army existed from mid-1830 to mid-1832, and its location is shown on a chart thought to have been drawn by Jean Louis Berlandier in 1834 (below). ​ He had accompanied Terán’s boundary expedition to Texas in 1828, and passed through this area in 1829 on an excursion from Bexar by land to La Bahia, Copano, and then by sea to New Orleans, returning the same way.  He returned to La Bahia (Goliad) in 1834, probably drawing this map of his route while traveling in that vicinity.  The chart shows "La Vaca" (red oval) on "Arroyo de La Vaca", which the caption says was named "Barranco Colorado" (green oval). 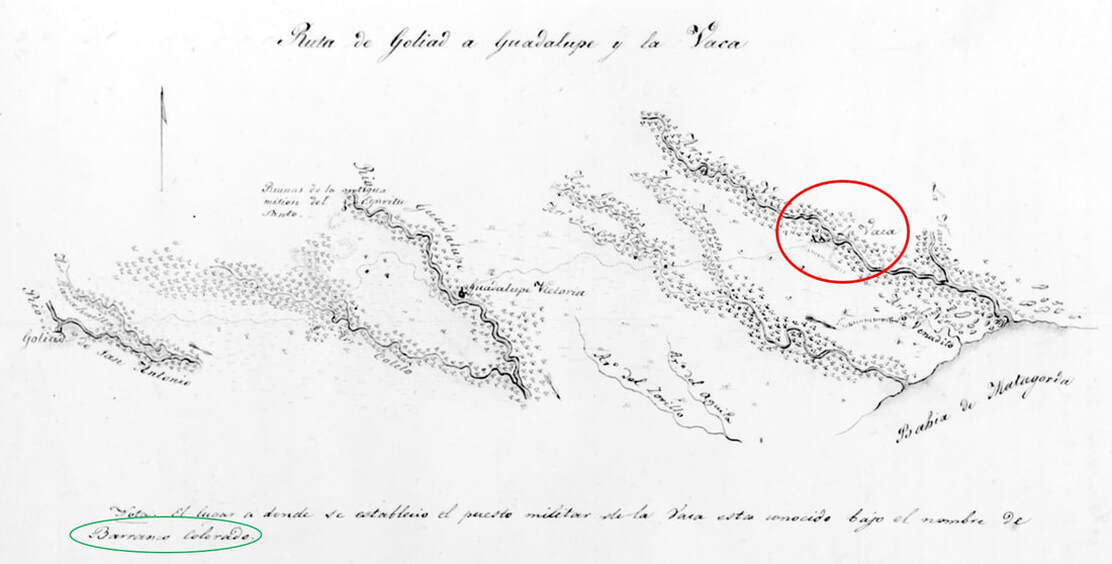 "Ruta de Goliad a Guadalupe (Victoria) y la Vaca", ascribed to Jean Louis Berlandier, circa 1834
from Beinecke Library (Yale University), WA MSS S-300, Box 8, Volume II
Caption translation: Note: The place where the military post of La Vaca was established is under the name of Barranco Colorado
​In his book "Reminiscences of Fifty Years in Texas", John Linn wrote these words: "Colonel Ugartechea, the commandant of the fort (Velasco) evinced a disposition and bearing by no means palatable to the colonists. He was a man of sagacity and foresaw the coming storm, and was possessed of a sufficient knowledge of the art of war to know that he could not uphold with a bare handful of men the supremacy of Mexico in the midst of an exasperated American colony. Consequently, he despatched couriers to Victoria, and possibly to other posts, for reinforcements. Captain Artiaga, who commanded on the Lavaca River, positively refused to send his men to Velasco, saying he was not under the command of Colonel Ugartechea. Captain Artiaga sought advice from some of the leading citizens of Victoria in regard to the Velasco affair.  The citizens consulted were Sylvester de Leon, Fernando de Leon, John McHenry, and the author of these reminiscences. Artiaga stated that he was opposed to the policy being pursued by General Santa Anna ; that he was not acquainted with the topography of the country and especially was he ignorant of that in the vicinity of the Brazos, etc. The citizens of Austin's colony were excited at the 'Bradburn outrage,' as the imprisonment of Travis, Jack, and others was very justly styled, and Ugartechea's position in holding out against the demands of the excited multitude was anything but encouraging.  Finally Captain Artiaga concluded that it would be dangerous for his men to march through the 'Caney Swamp'."
Vicente Filisola in "Memorias para la historia de la guerra de Tejas" Vol. 1 (English translation p. 139) has this passage:
“The town of San Felipe de Austin is the capital and focal point for the colonists of Texas.  General Terán has ordered the occupation of this and El Paso del Caballo, Lavaca or Barranco Colorado, Fort Velasco, Galveston, Anáhuac, Fort Terán, Harrisburg, Nacogdoches and Tenoxtitlán and some others.”

​As a high school student, Mindora Bagby wrote a prize-winning essay in 1924 for the Caldwell Prize in Local History, published in the University of Texas Bulletin, which mentioned in part “.... As late as 1832 the Mexican Government kept soldiers in a fort that stood on a high bluff on the west side of the Lavaca River. The traces of the fort and the old mission have almost disappeared and there are very few people living in the county at present who can locate the sites where they stood. At Dimmett's Landing on the Lavaca (Dimmitt’s Landing was on the west bank at the mouth of the river), the Texans, in the revolution with Mexico, received many of their supplies and ammunition. About thirty-five years ago some of this land was put in cultivation and old cannon balls, bayonets, sabers, and muskets were plowed up.”
​


Ira Thomas Taylor published the book "The Cavalcade of Jackson County" in 1938, with a small chapter entitled “Last Camp Site of Mexican Army in Jackson County”.  It says in part “As late as 1831 and 1832 a Mexican army of some two hundred men with some thirty or forty convicts was stationed within the present boundaries of Jackson County, in the southeast corner of the John Linn Survey and on the west side of the Lavaca River near the present home of Charley Jones.  It had been proposed by the Mexican Government to build a fort undoubtedly intended to overawe and if necessary to exterminate the citizens who had come from the United States in good faith to make their homes in Jackson County. ... This military camp under the command of Captain Artiaga at a point called “El Banco Colorado” or the “Red Bank,” was an army camp as well as a penal colony for convicts from old Mexico.  The convicts were engaged in making brick and shipping them by boat to ports in old Mexico.  Brick were actually manufactured there at that early date, and a number of such brick have been dug up from that brickyard and are now souvenirs of many of our citizens. ... This army was removed and the camp abandoned by order of the Mexican Government in July, 1832. ... All that remains of this old camp site on the high river bank is part of the remains of the old brick kiln.”  The John J. Linn survey is shown on the map below, with a red arrow indicating the approximate location of Barranco Colorado, also showing an old road segment which appears headed toward it.

​In an effort to begin a study of this establishment that has been "lost to history", we will begin posting documents from the ...
Béxar Archives and Austin Papers
The former is courtesy of the Dolph Briscoe Center of American History, University of Texas at Austin

Abstracts of documents in Bexar Archives about the Lavaca Post:       Jan-1830 to Mar-1832          Mar-1832 to Mar-1833
​
Other documents from both the Nacogdoches Archives and the Bexar Archives have been translated in the past by Robert Bruce Blake, and are found in a massive set of 93 volumes called the Robert Bruce Blake Collection (one copy of which exists at the Clayton Library in Houston TX).  So, when such is found involving the Lavaca post, they are displayed here: